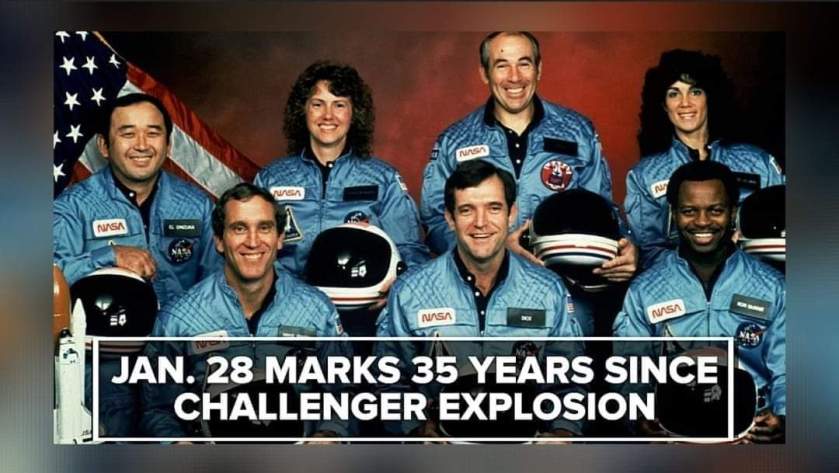 January 28, 1986 was a bitterly cold day in South Florida. The previous night a front had swept through, plunging temperatures below freezing and bringing a morning of brilliant indigo skies. Walking into work that morning, I stopped, faced the north wind and inhaled deeply. It was the sort of morning that made you feel alive, grateful, exhilarated.

I remember it so well because the shuttle Challenger was lifting off at noon with a school teacher on board. Being an astronomy buff, I was really intrigued. Me and my buddy went to his house during lunch to watch it on TV.

The usual delays, beeping, terse chatter and then the big digital numbers near the pad began the countdown. At 00:00, a swirl of debris, some tentative tongues of flame and then a reddish-orange fireball as the restraints fell away and Challenger slowly rose toward the heavens.

As I watched it gain altitude and speed, I marveled at all the people who had contributed to this program…how so many details had been managed, the math and physics involved, the power of the rockets, the thrill the seven astronauts must be experiencing. People with vision, people who could transcend the squabbling and bickering and pettiness had come together as a team and set their gaze on something higher…and I was watching the result.

Seventy-three seconds into the flight, at an altitude of 46,000 feet and going just under twice the speed of sound…something happened. Of the millions of pieces of equipment on board, of the thousands of actions and checks and commands going on at once, one of the pieces failed. Not a complex, finicky piece, not a human-controlled piece. A simple piece, a rubber gasket…an O ring…with one simple job to do. But it didn’t. Because as the world slept and NASA made their last checks, the O-rings soundlessly froze and cracked in the frigid Florida night.

The catastrophic explosion didn’t register at first. I simply didn’t process it, this must be a video error, it must be planned, it must be something. It wasn’t until the solid rocket boosters flew wildly in circles, leaving thick white circular plumes and a small speck–Challenger–fell from the yellow fireball did I draw breath. Oh, my God. My buddy and I stood, staring at the TV, sickened.

It was all people talked about for weeks. As a nation, we grieved. But then again, we started asking questions…what, how, why. And as a nation, we picked ourselves up with improved designs, undeterred enthusiasm, unquenched curiosity. We cheered as Discovery thundered back into orbit in September 1988. The dauntless American spirit. Rest in peace, Challenger crew